Menu
Log in
Register
Install the app
You are using an out of date browser. It may not display this or other websites correctly.
You should upgrade or use an alternative browser.

I am at wit's end. I have a document that contains a number of charts that were originally designed in PowerPoint. The charts were copied-and-pasted into Word. I want each chart to appear after explanatory text, something like this: 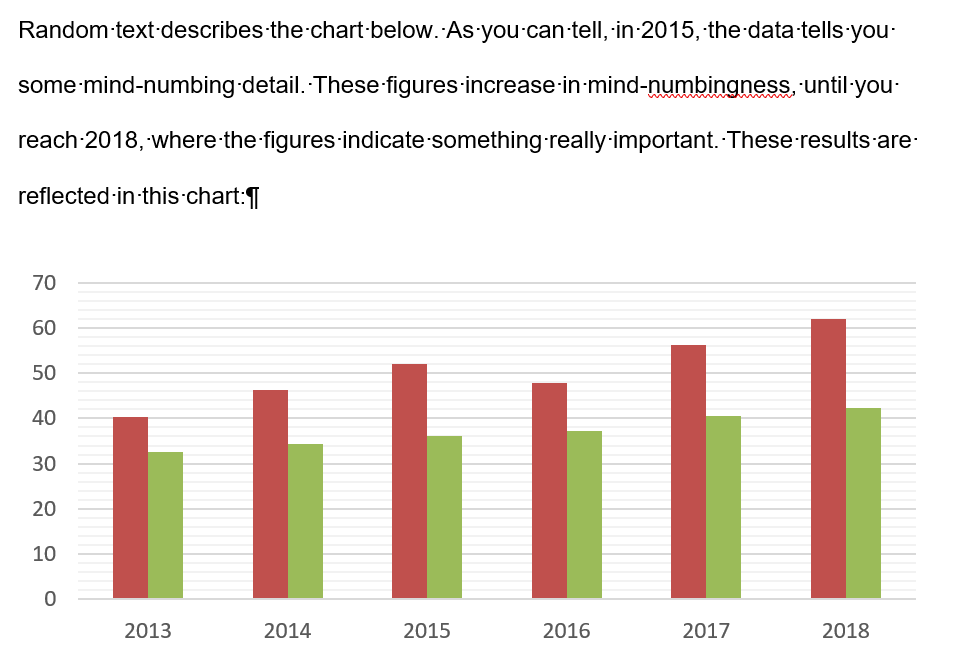 Despite trying every combination of options in the Layout Tab (and it Position and Text Wrapping choices), I cannot get the charts to move when text is edited. I have selected Top and Bottom (with text wrapping) for the Layout. The "move with text" option is selected. Under Position, I have Horizontal Alignment set to Centered on Page. I have tried playing the the Vertical settings, thinking they are the problem but I have found no way to let the chart float vertically relative to the text. I have also enabled and disabled, at various times, "Move object with text" and "Lock Anchor."

I have read every resource on the internet dealing with how to position objects and images in Word. Most of them describe how to anchor an image into one spot, but very few address how to get an image to float for follow a specific point in text.

I would be grateful for any and all assistance. Many thanks.
Ad

Want to reply to this thread or ask your own question?

You'll need to choose a username for the site, which only take a couple of moments. After that, you can post your question and our members will help you out.